Rewilding Europe – an innovative idea and a strong network

Rewilding Europe has set itself the goal of securing at least 1 million hectares of land for rewilding in ten areas across Europe. There are already rewilding areas in Portugal, Sweden, Bulgaria, Italy, Croatia and Romania as well as the cross-border Danube Delta area shared by Romania, Moldova and Ukraine. The Oder Delta became the eighth rewilding area in 2015. 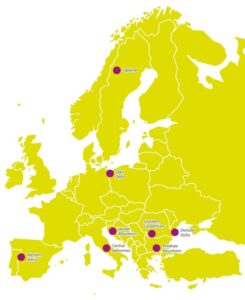 We are Rewilding Oder Delta

Partner for nature conservation beyond borders

Rewilding Oder Delta e.V. was founded in 2019 as an independent association based in Stolpe an der Peene (Germany). The association emerged from a long-standing cooperation between the organisations Environmental Action Germany, HOP Transnational Netzwork Odra, NABU Mecklenburg-Vorpommern, as well as the Polish association of Friends of the Ina and the Gowienica Rivers (TPRIiG) and the Stepnica Tourism Organisation (SOT). Since 2013, nature and tourism enthusiasts have been working together successfully, particularly in the east of Mecklenburg-Vorpommern. Since its foundation in 2019 the association has initiated numerous projects.

We link our nature conservation projects with ecologically oriented economic interests. In doing so, we promote the distribution of regional products, nature-friendly tourism, as well as natural and ecological agriculture and forestry. Together, we observe and prevent controversial infrastructure development projects in the region such as the regulation plans for the Oder River or the settlement of mass livestock farms in the still untouched nature areas of the Oder Delta.

Ulrich studied Law in Cologne, Saarbrücken and Lausanne, with a focus on environmental law. He started his career at the German Federal Environmental Agency and UN Environment Program in Nairobi, lectured environmental law at the Technical University Berlin, then worked for 18 years for the Ministry of Environment Brandenburg (1991–2009) developing the nature protection legislation for Brandenburg and the National Park Lower Oder Valley.
Since then, he has dealt with wilderness and rewilding issues, among others responsible for the state designation of wilderness areas in Brandenburg, and coordinated the Regional Nature Conservation Working Group for the German National Heritage. In 2009 he accepted to lead the nature conservation and biodiversity department of the environmental NGO Deutsche Umwelthilfe (DUH) – Environmental Action Germany. From 2012 on he coordinated DUH´s rewilding efforts in the Oder Delta as the initiative´s team leader for Germany. In 2019, he was one of ROD´s founding members. After more than 12 years with DUH, he brings in more than 30 years of conservation experience and a major environmental policy expertise into ROD. From 1st of January 2022, Ulrich is one of ROD´s two managing directors.

Peter was born in Poland and studied geography in Berlin. He has been active for nature conservation for more than 20 years. With WWF Germany he lobbied for greener EU funds and developed guidance on financing Natura 2000 for the European Commission. Between 2015-2020 he managed the Baltic Sea Conservation Foundation and supported conservation projects across the whole Baltic Sea region. He joined Rewilding Oder Delta as Team Leader Poland in 2020 and is one of two managing directors at ROD.

Since 2016, Katrin helped initiate and supported Rewilding Oder Delta’s activities. A trained conservation biologist with a background in ornithology and freshwater ecology, she worked with the European communication team at WWF-International, and directed the French NGO Wild-Touch during a meta-project on tropical rainforests. At ROD, she helps coordinate the projects especially in cooperation with Rewilding Europe and overviews the communication activities.

Frank has been working as a network manager in various regional development projects.
Since 2013 he has worked in the HOP Transnational Network Odermündung on the development of Rewilding Oder Delta. Frank also works on a voluntary basis in the Peenetal River Landscape Nature Park and in the Western Pomerania Tourism Association (TVV), as well as a certified nature and landscape guide (ZNL). With his knowledge of regional development in the Oder Delta, he is responsible for the network coordination at ROD.

Jonathan studied  Environmental Sciences at the University of Lüneburg.
Together with the partners  Stepnicka Organizacja Turystyczna (SOT), Zachodniopomorskie Towarzystwo Przyrodnicze (ZTP), HOP, MSS and the German Environmental Action (DUH), Jonathan played a substantial role in establishing the Oder Delta as a rewilding area. Diking of wilderness areas, wind farms in Natura 2000 areas and conversion of grassland to arable land has been stopped and new perspectives for regional development developed. Jonathan worked for the Nature Conservation and Biodiversity Department of DUH from 2013-2015. Between 2016 and 2019, Jonathan worked for the German League for Nature and Environment (DNR), and developed together with partners from SOT, KRR, ZTP, BUND, DUH, WWF and NABU the strategy against the German-Polish expansion of the Oder river. He was DNR’s liason person with the Polish authorities and the World Bank.
Jonathan represents NABU (Nature and Biodiversity Conservation Union / Birdlife Germany) for the Oder River.
At ROD, Jonathan is responsible for wildlife comeback, land use, agricultural subsidies and tourism.

Suleika majored in Ecological Economics (MSc) at the University of Edinburgh and in economics (BSc) at the Freie Universität Berlin. From 2012 – 2021 she worked for the Nature Conservation and Biodiversity Department of the environmental NGO Deutsche Umwelthilfe (DUH) in various fields such as ecosystem services, nature-based economy, wilderness, marine ecosystems and bioeconomy and has played a substantial role in preparing and coordinating the nomination of the Oder Delta rewilding area as well as building up a strong network of partners within the region, coordinating the local team for several years. After founding of ROD in 2019 she became a member of the board of trustees (2019-2021) and since 2022 has been directly involved in the projects as a project manager.

Brit Carlotta studied Wildlife Management at the Van Hall Larenstein University of Applied Sciences in the Netherlands and joined ROD in February 2021. With a specialization in International Wildlife Management, she kept her focus on nature and species conservation, ecology, as well as scientific research in Germany, the Netherlands, and South Africa. Since October 2021, Brit Carlotta studies biodiversity, evolution and ecology (M.Sc)  at the Free University of Berlin alongside her work at ROD.

At ROD she focusses on the topics wildlife comeback and monitoring as well as on geographic information systems (GIS) for planning and communication processes.

Eliza graduated in Geology and Biology from the University of Warsaw and currently completes her PhD in peatland ecology at the West Pomeranian University of Technology in Szczecin. She has been involved in nature conservation since 2012, and worked in wetland habitat and species conservation projects in Western Pomerania. At RDOŚ in Szczecin, she dealt mainly with nature reserves in the West Pomeranian Voivodeship. She is a member of local cooperation teams in the development of management plans for Natura 2000 areas in the Odra Delta.
For the last 2 years, she managed OTOP’s West Pomeranian reserves, including “Karsiborska Kępa”. She founded and leads the local West Pomeranian OTOP group (Polish Society for the Protection of Birds).
At ROD, Eliza is the peatlands and wetlands expert.

Wiebke studied International Development (MA) at the University of Vienna and Wildlife Biology & Conservation (MSc) at Edinburgh Napier University.
She did interdisciplinary work on land use conflicts caused by nature conservation and human-wildlife coexistence in countries such as Tanzania and South Africa.
From 2019 to 2022 she worked as an ecological consultant in Berlin and surroundings.
At ROD, she focusses on wildlife comeback and monitoring.

Katrin studied biology (MSc) at the University of Göttingen and Macquarie University Sydney, specializing in (marine) conservation, behavioral biology and ecology. From 2020 to 2022 she worked for NGO Environmental Action Germany (Deutsche Umwelthilfe) in marine nature conservation, particularly on the topics of marine ecosystem services, marine protected areas and fisheries, and supported the organization of a German-Polish marine conservation conference.
At ROD she works in marine and coastal ecosystem conservation and supports marine rewilding projects.

Nancy studied water resource management at the Rottenburg University for Forestry and engineering ecology at the Magdeburg-Stendal University. She has previously worked in the field of near-natural hydraulic engineering and nature conservation.

In the ROD team, she is responsible for project activities on rivers and freshwater systems.

Agnieszka finished her master’s degree at Westpomeranian University of Technology in Szczecin specialising in sustainable design. Having more than a decade of expertise in managing graphic, marketing, and photographic projects she also has extensive facilitation experience. Agnieszka has collaborated with Global Ecovillage Network and organisations undertaking direct action related to nature conservation across Europe.

At ROD she takes care of the graphic designs and online communication.

Marianna is currently a student at the Academy of Art in Szczecin at the Faculty of Media Art. She is involved in new media and has experience in design, photography and social media.

At ROD, Marianna assists in various projects and tasks, and deals with graphic design and communication.

Stefan studied landscape ecology, worked for the Michael Succow Foundation for many years and has been in charge of the NABU Foundation areas in Mecklenburg-Western Pomerania since 2017; where he is responsible for one of the most impressive wilderness landscapes in northern Germany, the Anklamer Stadtbruch. Together with the David Foundation (David-Stiftung), he leads the Wilderness in Germany initiative (Wildnis in Deutschland). Stefan is the honorary state chairman of NABU Mecklenburg-Western Pomerania.

Stefan is one of the founding members of ROD and has been honorary chairman of the association since its foundation.

Artur holds a MSc in marine fisheries engineering, with a specialization in ichthyology and water ecology. He is involved in many pro-environmental projects in cooperation with regional environmental protection institutions, scientists and NGOs, and chairs the Society of the Friends of the Ina River and Gowienica (TPRIiG) since 2008.

He is an expert to the Polish parliamentary group for the renaturation of the Odra river, an advisor to WWF Poland freshwater programme and a member of the working group for water management in the Agriculture Committee of the Polish Parliament.

Artur supports ROD since the beginning as board member and through his expertise and experience.

As a geographer and certified canoe, nature and landscape guide, Frauke runs her company flusslandschaft reisen. Since 2009, the tourism expert has been active full-time in the Oder Delta area, opening up the unique natural landscapes to visitors by means of canoe, bicycle or on foot.

We welcome Frauke as ROD board member since 2022.