The Rewilding Oder Delta site covers an area of 450,000 hectares, of which the open waters of the Stettin Lagoon make up 70,000 hectares. Our work focuses on the core areas of Peenemünde and the Ueckermünder Heath. We also focus on the Ina and Gowienica rivers and work in the surrounding forest regions of Puszcza Goleniowska and in the open landscapes of the Stettin Lagoon. With new projects, we are increasingly extending our activities to the island of Usedom, the Swine Delta and the Kamieński Lagoon with the Rozwarowo Marshes.

In doing so, we focus mainly on the following tasks:

Rewilding is an increasingly popular method that looks at nature conservation issues in a wider landscape context. Together with residents and land users, we want to show the advantages rewilding can bring both for nature and people.

To accomplish this, we need to influence policy decisions, so that the idea of rewilding can be embedded in regional and local development strategies. The main influencing factors here relate to EU subsidies. That is why we are working to make subsidies for agriculture and fisheries more focused on nature conservation. In terms of infrastructure development, it is also important to ensure that consideration is given to the ecological framework conditions. An integral part of rewilding is restoring ecosystems. With the UN Decade on Ecosystem Restoration and the new EU Biodiversity Strategy 2030, which provides for an EU plan to recover nature, we can count on broad political support for our work.

Find out more in our Call to Action for a Wilder Europe! 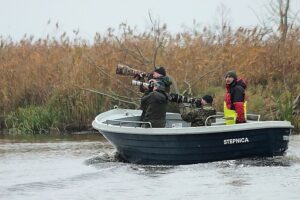 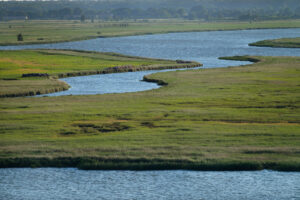 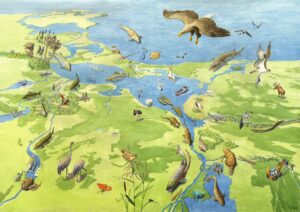 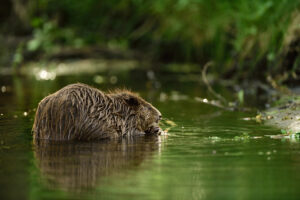 Rivers are the life force of the Oder Delta. At the same time, these waterways transport nowadays large amounts of pollutants into the lagoon, threatening fish stocks.

Climate change is also making its presence known with persistent droughts or heavy rainfall. The problem of regulated and channelled rivers is twofold: In dry periods, there is a lack of water, meaning that areas of the floodplain dry out, and a decreasing groundwater level has negative effects on surrounding forest and agricultural areas. During heavy rains, however, the regulated and embanked river flows become excessively high and cause catastrophic floods.

Preserving natural rivers in the Oder Delta is particularly important to us because they regulate the water supply in the region, reduce nutrient loads, offer important spawning grounds for a wide variety of fish species, and protect endangered habitats. Rivers, together with the floodplains, represent important migration routes for species like the wolf and elk, and also offer valuable recreational areas for people.

Located in the heart of Europe, the Oder Delta offers spacious, connected and sparsely populated, undisturbed landscapes, in which wolves, elks, beavers, and even sea eagles, feel at home. With its varied mosaic of land, marine, and freshwater ecosystems, such as coastal areas and lagoons, large peatlands and meadows, dense forests and unspoiled river valleys – the Oder Delta offers to large animals exactly the wide range of habitats they need for a stable population growth.

However, various factors such as the increase in tourist infrastructure, the expansion of motorways and plans for industrial sites, as well as an insufficient awareness among the population, is putting the successful return of many animal species at risk.

Following the relaxed approach of people towards wolves, elks, and the European bison in Poland, we work to ensure that an undisturbed migration of these animals continues and that their populations in the Oder Delta can develop across borders. 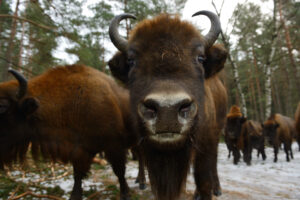 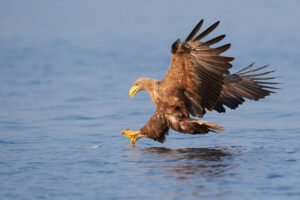 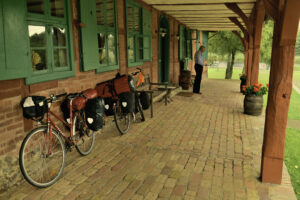 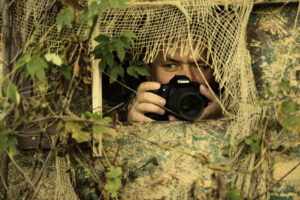 If you are looking for an extraordinary nature experience away from the commercial tourism at Usedom and Wolin, the Oder Delta is the place to be. Just a few kilometres south of the crowded Baltic beaches, visitors can discover a surprising, largely untouched natural treasure. The tourist offers for a gentle, nature-friendly exploration of the area are still rare. On the German side there are already some good examples, especially in the Peene Valley. On the Polish side, the idea of increasing tourism by constructing numerous marinas and developing the area with holiday homes and adventure offers still dominates. Good examples such as the Nature Guides Network and Oder Delta Safaris are still rare.

We want to develop tourism in the Oder Delta in a sustainable way and in line with nature conservation – as such, we promote high-quality guided nature tours, as well as local and ecological products, and sustainable mobility.